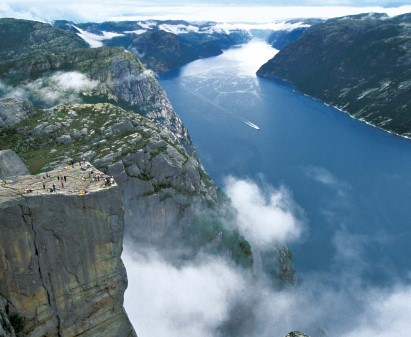 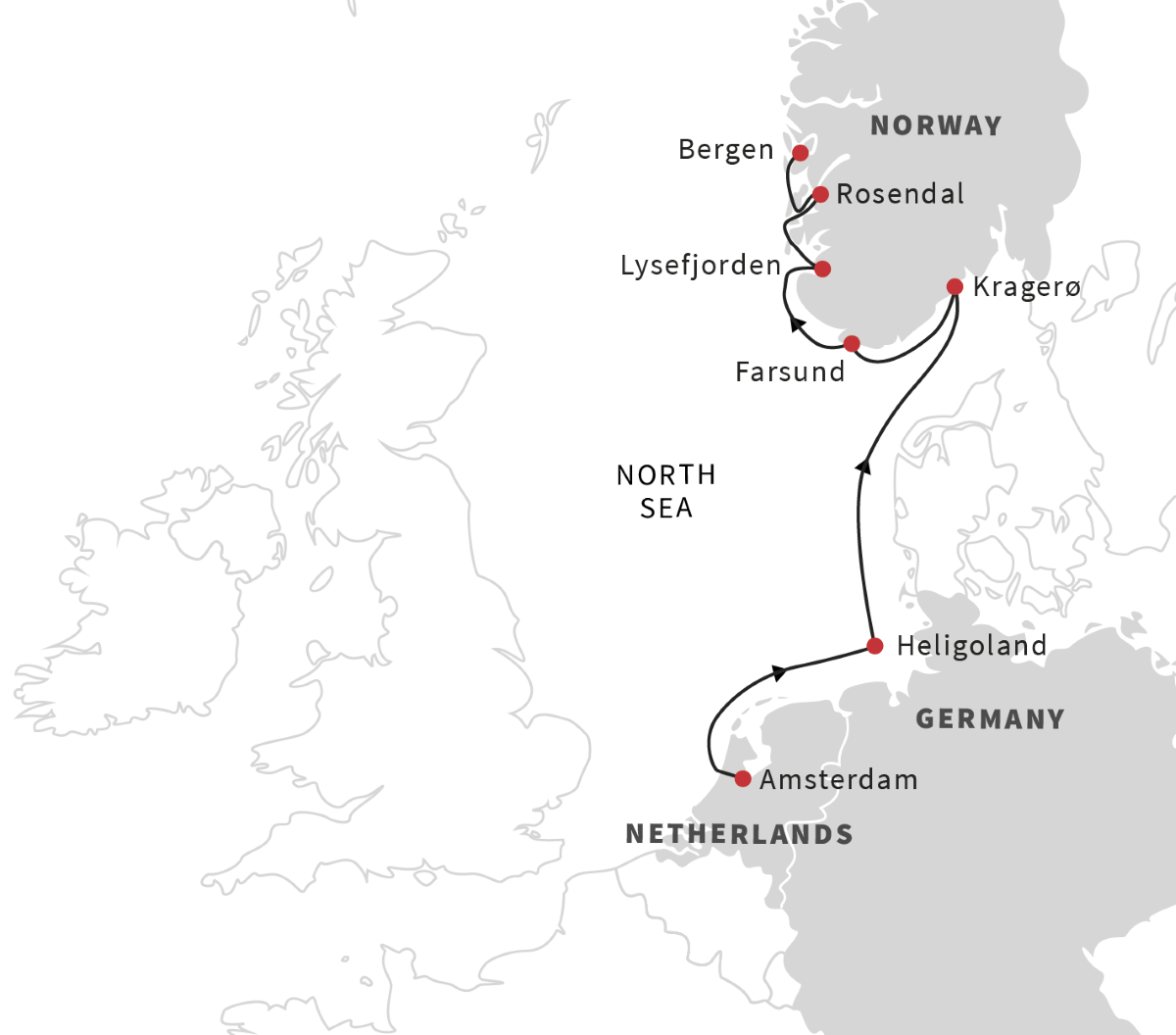 This is an expedition where weather and wind conditions will determine our final schedule. Safety is paramount and the captain will decide the sailing itinerary during the voyage. Therefore, this itinerary is just an indication of what you can experience, and why every expedition with Hurtigruten is unique. 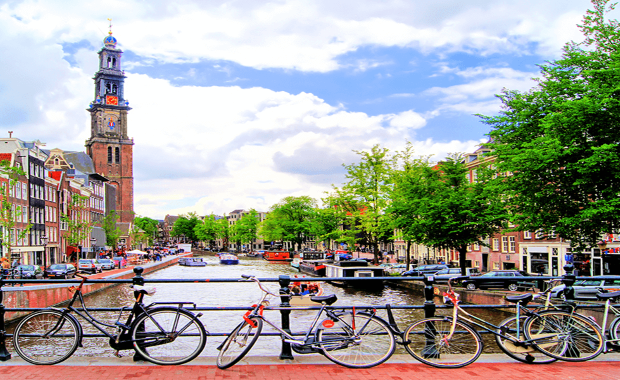 Amsterdam grew from a small fishing village in the 13th century to become one of the most charming and culturally important cities of the world. The city became a worldwide trading centre with important connections to the Hanseatic League in the 17th century.  Evidence of the prosperity of Amsterdam´s "Golden Age“ can still be seen in the Patrician houses in the city´s famed Canal District, a UNESCO World Heritage Site. Amsterdam is well-known for its outstanding museums like the Rijksmuseum, the Rembrandt House or the van Gogh Museum. 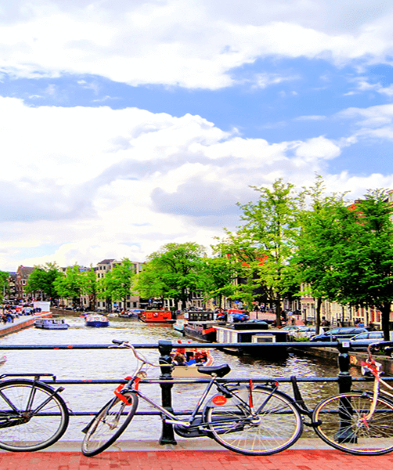 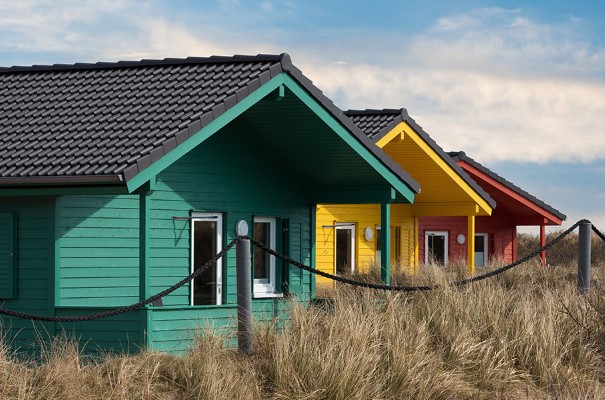 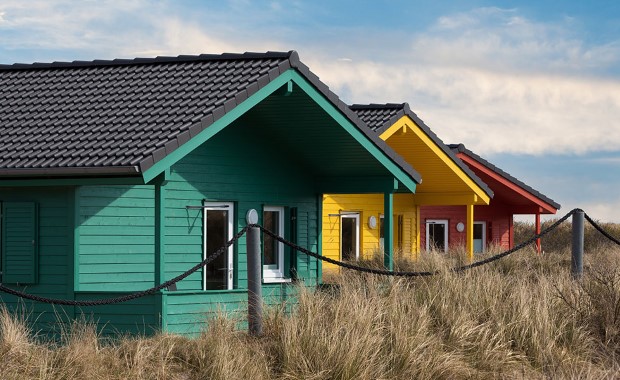 Germany’s only high sea archipelago consists of two small islands called Helgoland and the Dune. Helgoland is famous for its unique scenery and diverse wildlife. Germany’s smallest nature reserve, Lummenfelsen, consists of a single rock – essentially a huge bird condo, densely occupied by the thousands of sea birds that nest here. Helgoland also has an intriguing history. Originally, it was founded by Frisians, then became a pirate base in the Middle Ages.

Afterwards, it was claimed by the Danes, only to be conquered by the British some years later. Then the British swapped the islands with the Germans for Zanzibar. During WWII, attempts were made to wipe the entire island of the map. So, it's safe to say that Helgoland is rich with exciting history. Come ashore to explore this fascinating and narrow island .

Unwind with a View 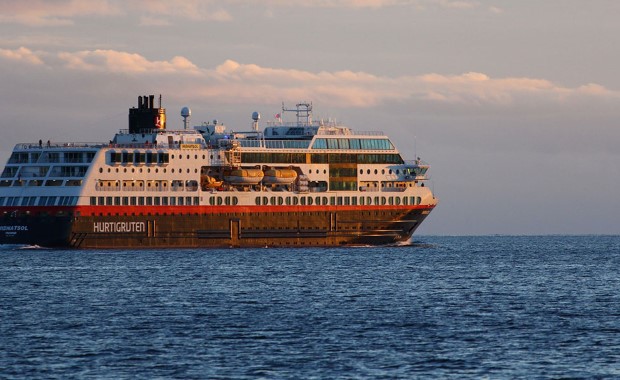 A day at sea means you can join the lectures by the Expedition team, spend time on deck or in the Panorama Lounge with fellow travellers as we sail.

Enjoy a refreshing workout in our well-equipped fitness room with a panoramic ocean view or let your muscles relax in one of the outdoor whirlpools. 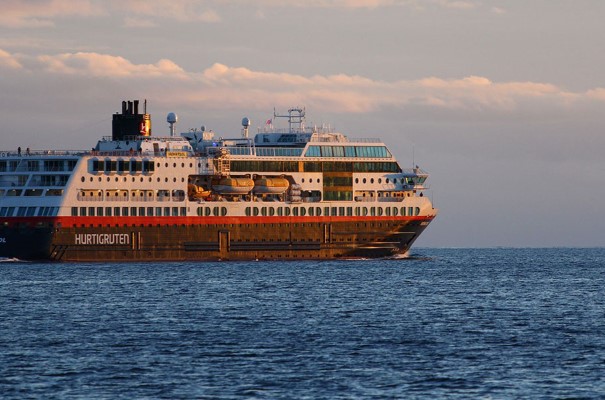 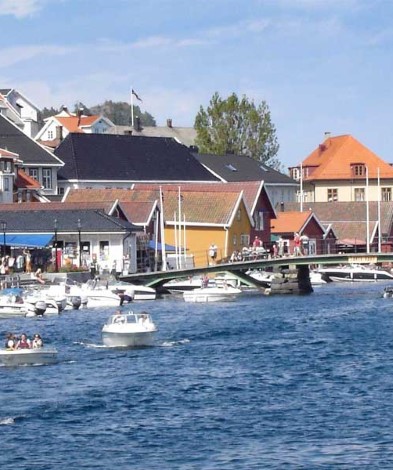 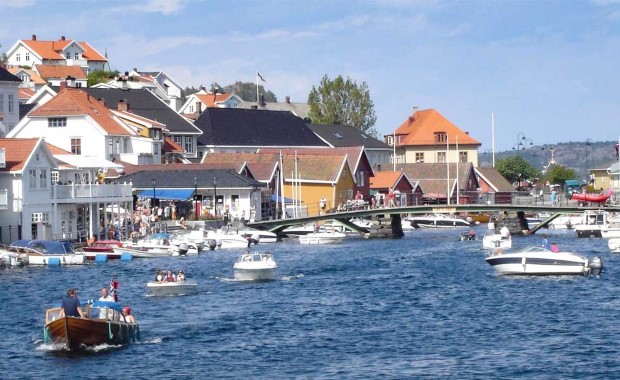 11,000 people call the charming narrow streets and alleyways of Kragero home. The town boasts a long history of art and culture and tends to inspire famous artists, who appreciate the fine light which is unique to this area.  Amble through the town to discover the assortment of galleries and charming cafes, or venture further afield for a longer walk or more adventurous hike.  The area is ideal for kayaking, as there are over 490 islands to explore in this large archipelago. 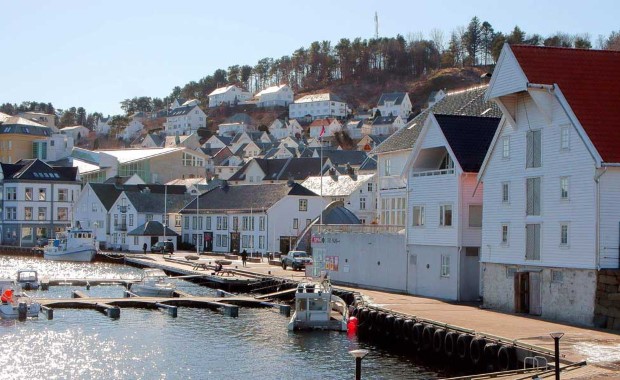 Farsund has a fascinating history, which includes hosting pirates as far back as the 1800’s. The area has some of the best beaches in Southern Norway, making it ideal for bird watching and shoreside walks. Every summer, Farsund celebrates its heritage during the “Kaperdagene” festival – translated as “Pirate days”.

This dates back to the Napoleonic War of 1804 when the area was ravaged by conflict, causing years of hardship for the locals, who turned to plundering passing ships to survive. Take a walk along the old railway line for spectacular views of the fjord, crossing a 100-year old swing bridge and passing a protected oak forest. 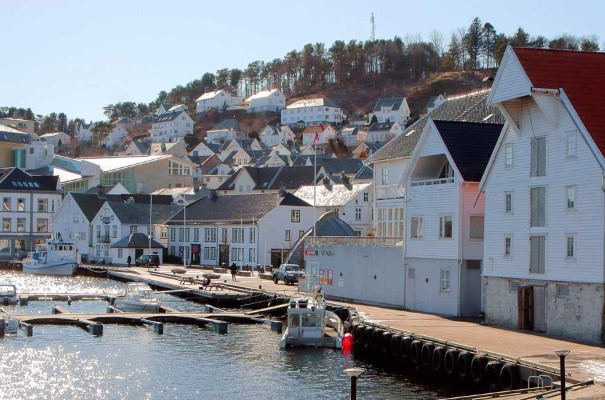 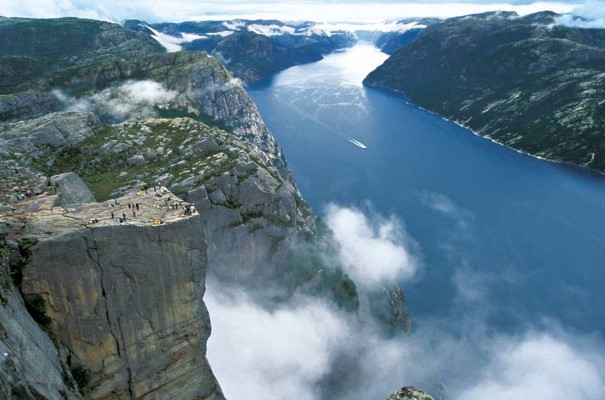 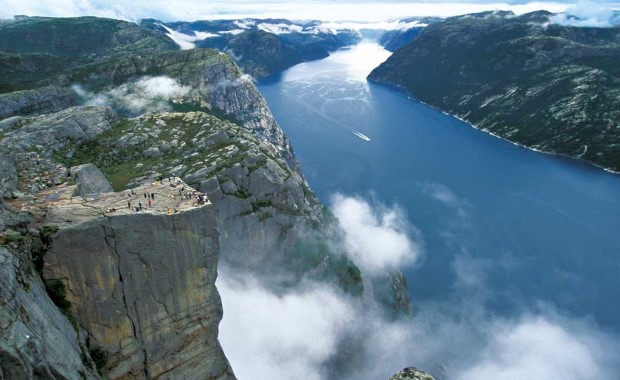 Lysefjord is 40 kilometres long and 422 metres deep at its deepest. Preikestolen, the most famous tourist attraction in Ryfylke, towers an impressive 604 metres over the Lysefjord. This is a flat mountain plateau of approx 600 square metres. We hope to have fine view of Preikestolen and the Kjerag peak towering 1,084 meters above the next highest mountain along the Lysefjord.

Mouth of the Fjord 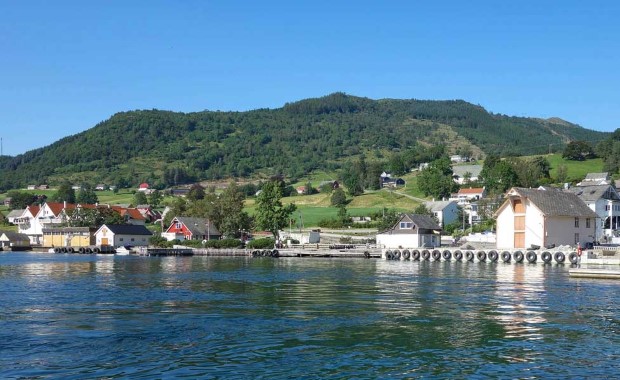 Rosendal is known for its baronial manor, now one of the most signifcant museums in Western Norway. Located “at the mouth of the Hardangerfjord”, this castle is the only manor of its kind in Norway. The castle is surrounded by a beautifully landscape park. Rosendal is also the place where the ship “Gjøa”, used by Roald Amundsen on his expedition through the Northwest Passage, was built. 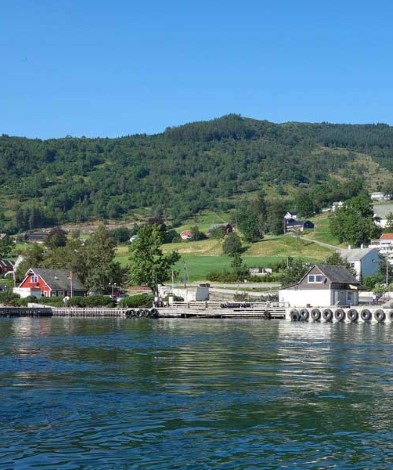 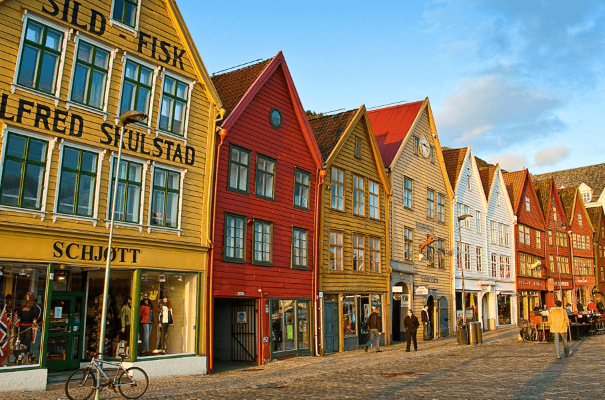 The famous Bryggen in Bergen.

The Gateway to the Fjords 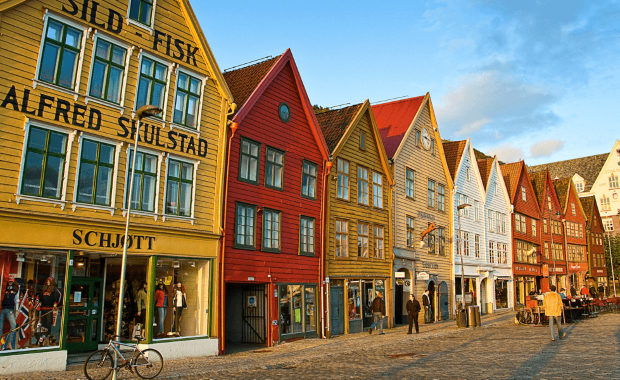 The famous Bryggen in Bergen.

After a tasty breakfast, it’s time to leave the comfort of MS Midnatsol and head home, or on to further adventures. As the starting point for our classic Norwegian Coastal Voyages, Bergen is the perfect starting point for further exploration of Norway's fjords, villages and incredible nature.

Bergen was founded in 1070 AD, and was the capital of Norway for several years. The city has preserved a great deal of local character and history. One example is the historic UNESCO-listed Bryggen district with colourful wharfs that date back to the 14th century.

The day-by-day programme will give you a few ideas about what you can see and do on your coastal voyage in Norway, but bear in mind that this itinerary is just an indication of what you can experience. After all, this is a sailing where the elements rule and weather conditions might vary, which is why every voyage with The Hurtigruten Coastal Express is unique.