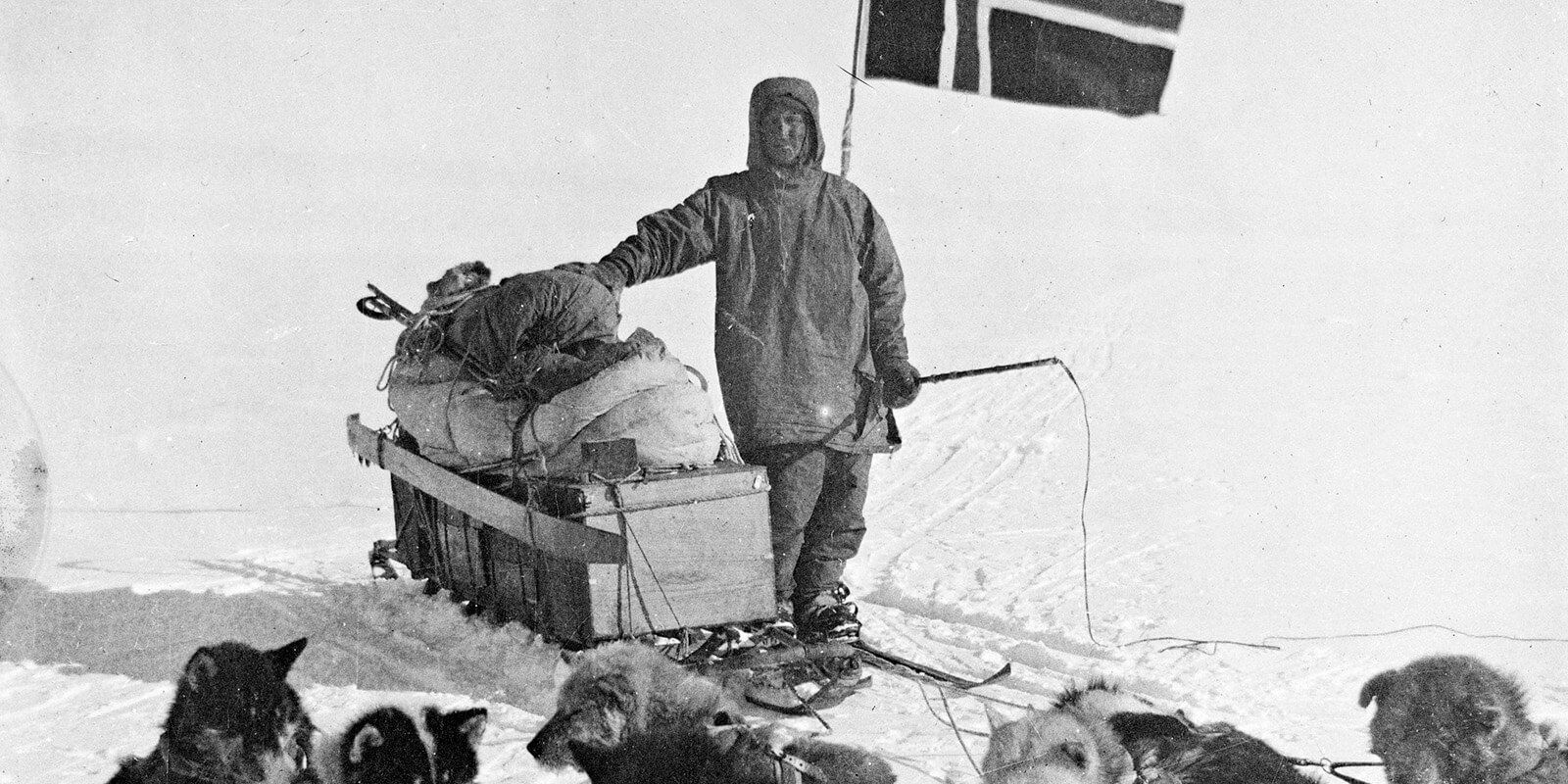 The Fram II expedition: A sensational adventure in northern Greenland

Legendary explorer Otto Sverdrup and his crew made the Fram II expedition one of the most fruitful expeditions in history.

See our expedition cruises to Greenland

"The king of arctic navigation" is not too shabby a legacy for Otto Sverdrup after his very eventful life of exploring polar waters. He was a steady and reliable captain through those long winter months.

Otto Sverdrup is known is as the third great Norwegian hero of polar exploring, along with Fridtjof Nansen and Roald Amundsen. Together with Fridtjof Nansen, he skied across Greenland in 1888, and on the ship Fram the two explorers showed that a vessel could drift across the Arctic Ocean with the ocean current.

When Otto Sverdrup went on his third adventure in 1898, he led the ship Fram and a crew of 15 people towards undiscovered areas in Greenland. This became one of the most fruitful expeditions in history.

After the success of the first Fram expedition with Fridtjof Nansen, investors started opening their wallets. Norway was approaching a dissolution of its union with Sweden, and national heroes like Nansen and Sverdrup were valuable to Norway at this time. 220,000 NOK were donated by brewer brothers Amund and Ellef Ringnes and Axel Heiberg. The state chipped in 20,000 NOK for repairs and necessary upgrades. When the Fram leaves the harbour on 24 June 1898, there are 15 men on board: Five scientists, including geologist Per Schei, cartographer Gunnar Isachsen, zoologist Edvard Bay, and botanist Herman G. Simmons, as well as a crew of 10. In addition to exploring northern Greenland and the islands north of Canada, the expeditions seek to investigate the depth of the ocean, and the flora and fauna of the area.

But before we go on this journey, we need to talk boats. The Fram is not just any vessel. She is Nansen’s tailor-made expedition ship – steady on the ice and perfect in extreme conditions. The problem with other expedition ships was their construction. They would twist down into the ice and be destroyed. The Fram, however, was made to almost resemble a coconut. Its shape made it twist up out of the ice, so it could drift along with the ice. In today’s money, the Fram would have cost over 18 million NOK.

Before the new expedition, she was taken to Larvik to be altered. A new deck and a saloon were added, as well as extra cabins, to make it more comfortable onboard. Ironically, there was one thing the Fram was not made for: long voyages on open sea. Her tub-like shape apparently made her crew very seasick. All in the name of science!

Before the first winter they will spend on their expedition, the Fram sails via Egedesminde, Godhavn and Upernivik in the south of Greenland. They bring on board 75 Greenland Huskies, supplies, coal, water and food. Sverdrup preferred the strong, friendly Greenland Husky for his expeditions.

The crew goes hunting in preparation for the cold months, and muskoxen and polar bears start appearing on their plates. The dogs enjoy walrus and seal. Kane Basin becomes base camp during this first winter. Ahead of them is Ellesmere Land, an unexplored island about two thirds the size of Norway.

One might think that the crew of the Fram was alone in this remote polar landscape. Not so. At the turn of the century, polar fever is spreading, and one day, Otto Sverdrup happens to meet American polar explorer Robert Peary on the ice. Peary was on his way to the North Pole at the time.

Otto Sverdrup gets an itch. Should he try it too? The idea of being the first to reach the North Pole is very tempting. The Fram is the perfect base, and he has enough provisions and dog sleds. The idea did not come to fruition. Maybe Sverdrup let it go out of respect for Peary, or maybe he couldn’t take the competition? Peary hurried along, ending up being the first person on the North Pole - but he paid the price of seven frostbitten toes.

Otto Sverdrup and his crew make other great discoveries. They spend the summers mapping out ice and islands, hunting and gathering scientific data, plants and fossils. On one of their mapping expeditions, three parties set out to find undiscovered land areas. Combined, they have 54 dogs with them.

Otto Sverdrup and Ivar Fosheim discover an island which they name Axel Heiberg, while Isachsen and Hassel come across two islands which they name King Christian Island, after the Danish king, and Ellef Ringnes Island, after the investor. The latter is an island of over 4000 square miles, where Isachsen and Hassel manage to map out the entire coast line – an incredible achievement.

Life on the ice of Greenland brings out the inventors in the crew. A new type of Primus stove is born: A patent which simultaneously melts the snow and cooks food or boils water. They also create a new type of tent, with a double canvas preventing frost from dripping into the tent.

Most expeditions at this time prepared for three winters in the ice. This was partly because the gathering of scientific data was quite a time-consuming activity, but also because they could only sail for a short period during the summers. The adventurers knew the threat of the long, cold, dark winters. Sometimes there were unfortunate tragedies. During the course of three months, two of the Fram crew died: doctor Johan Svendsen shot himself in the tent during a sled expedition on the mainland. He explains his dark thoughts to the crew in a letter, and reveals that he has been abusing morphine and cocaine. Shortly after that, handyman Ove Braskerud dies of pneumonia. There is a veil of grief over the expedition.

During the third winter, the Fram is frozen stuck at the Goose Fjord, on the southwest of Ellesmere Land. After a lot of hardships, losing friends and a near-distaster involving fire and dynamite, the atmosphere on the ship starts to improve. They celebrate Christmas on a boat full of fresh food, singing and drinking. No scurvy in sight. This winter will be the coldest yet, approaching a terrible -60 degrees Fahrenheit.

Under the surface, a threat is simmering. The record-breaking cold makes the ice even thicker, and when spring comes, Sverdrup realizes that they will not be able to make it home by the time they planned. Even explosives will not get them out before a new winter creeps up. The Fram stays in the Arctic Sea for a fourth winter.

When Otto Sverdrup and his expedition make it home in the spring of 1902, they bring a great load of potential research results. Over 50,000 important samples made it home, including 2000 glasses with invertebrates, rocks, fossils and lots of plankton, and data on ice, geomagnetism and polar temperatures.

Norwegian, Russian, Swedish, German and British researchers are ready to process the findings. The homecoming of the Fram marks the beginning of a new era of more cooperation in research between countries and scientific fields. Three years later, the dissolution of the union also becomes a fact. During the following years, until 1926, no less than 39 scientific dissertations are written on Fram’s findings.

One may wonder what Otto Sverdrup would have said today if he knew that Hurtigruten planned to sail in the same waters as the Fram II expedition? Perhaps he would tell stories of the race towards the North Pole and the passion for discovery. Of the age of pioneering, the coastal landscape, the beautiful spring days in Greenland and, not to mention, the comraderie on board the Fram.

Maybe he would send us off wishing us a happy expedition.